Router Unlock
Home How To

I have shared about Huawei E5578 features and specs, including unlocking, in brief. In this post, I will provide two unlocked firmware that can be used in the unlocking of the E5578 mobile WiFi router.

Make sure the firmware change is risky and wrong steps may dead your device. I have personally tested it, and this solution is working fine. Basically, Huawei E5578 comes with V4 Algo unlock code, and currently, there is no mechanism to generate the NCK code using IMEI directly. In unlocking E5578, there are two firmware files involved.

2. Now, run the universal master code tool and generate firmware code through the Huawei tab or comment below to get the firmware code/password.

3. Reset the E5578 and connect to the PC with its default USB cable.

5. It will detect your device and ask you for a password.

6. Input the firmware code which you have already generated in Step 2.

7. Wait till the finish.

10. Copy and paste the below command at the end of the result: 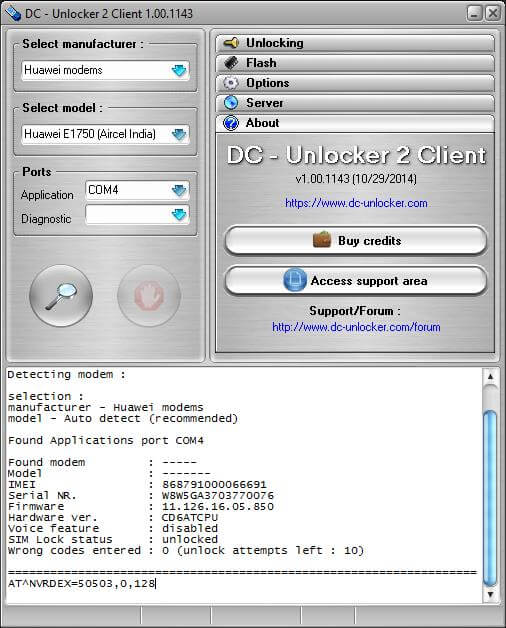 11. It will generate some NV codes in hash format.

12. Copy all the details, pay 6 USD through the PayPal button, and mention the IMEI model in the transaction. I will email you and ask you about generating a hash code. After providing the hash code, I will convert it into NCK / unlocked code and emailed you back.

Note: After the above steps, your device will stop working. After getting the code, update the device with Huawei E5578s-932 Firmware 21.180.15.00.00, which you have already downloaded.

Note II: Unlock / NCK code is not free. Its charge is only 6 USD, which you can pay through PayPal. Required codes will be emailed within 8 hrs.

Some special services are also available, in which there is no firmware change involved.

Update I: For Orange France locked Huawei E5578 or any other device, you can place the order here.

Update III: For O2 U.K. locked Huawei E5578 router, you can place an order for an unlock code here.

Update IV: You can directly place the order for V4 & V5 unlock code. How to remove dead Startup programs or Invalid entries from Task Manager in Windows 10? How to Use Emojis in Files and Folders Names in Windows 10? How to Repair Corrupted Recycle Bin in Windows 10? How to Unlock ZTE ZMax Pro?